The week before Rosh Hashanah is always a busy time for those in the Jewish community. For Adam Levine, his week probably just got a whole lot busier.

On Monday, news broke that involved the Maroon 5 frontman cheating on his wife, sexting like a teen and *squints* trying to name a baby after his mistress?!

Yes, that’s right. Let’s get into it.

Wait, who is Adam Levine?

If you are asking this question, it seems like you have a healthy relationship with unplugging and I respect that.

Adam Levine (born in 1979) is an American singer, songwriter and musician, best known as the lead vocalist for the band Maroon 5. As a member of Maroon 5, Levine has won three Grammy awards and had loads of commercial success.

I said they were successful.

ALSO! For reasons that are somewhat obvious, it’s important to note that Levine has been married to Victoria’s Secret model Behati Prinsloo since 2014. (Fun fact: Jonah Hill officiated their wedding!) Together they have daughters Dusty Rose (born 2016) and Gio Grace (born 2018), and a third child currently on the way.

JK, yeah he’s Jewish. Adam’s father Fredric Levine and maternal grandfather were Jewish, and as evidenced by this tweet, he considers himself to be Jewish:

Sadly, Santa put me on his naughty list because I'm Jewish and I should be celebrating Hanukkah. St. Nick keeps it real. I respect that.

However, Levine is more spiritual than religious. He also never had a bar mitzvah because he saw too many of his peers doing it for the wrong reasons.

So what’s the problem?

On September 19, 2022, an Instagram model named Sumner Stroh shared a TikTok alleging that she had an affair with Adam.

In the video, Sumner explains that she and Levine had an affair for about a year (in a subsequent interview, she clarifies that they had a physical relationship in 2021). “Quite frankly I feel exploited,” she states in the video and goes on later to add, “My morals were unknowingly compromised. I was completely manipulated.”

As proof, Sumner includes screenshots of flirty Instagram conversations between herself and the Maroon 5 frontman. “It’s truly unreal how fucking hot you are,” one of the messages from Levine reads.

And just when you think things couldn’t get even more incriminating for Adam, Sumner also includes this screenshot of a message she received on June 1, 2022, after a period of time when they had not been speaking: 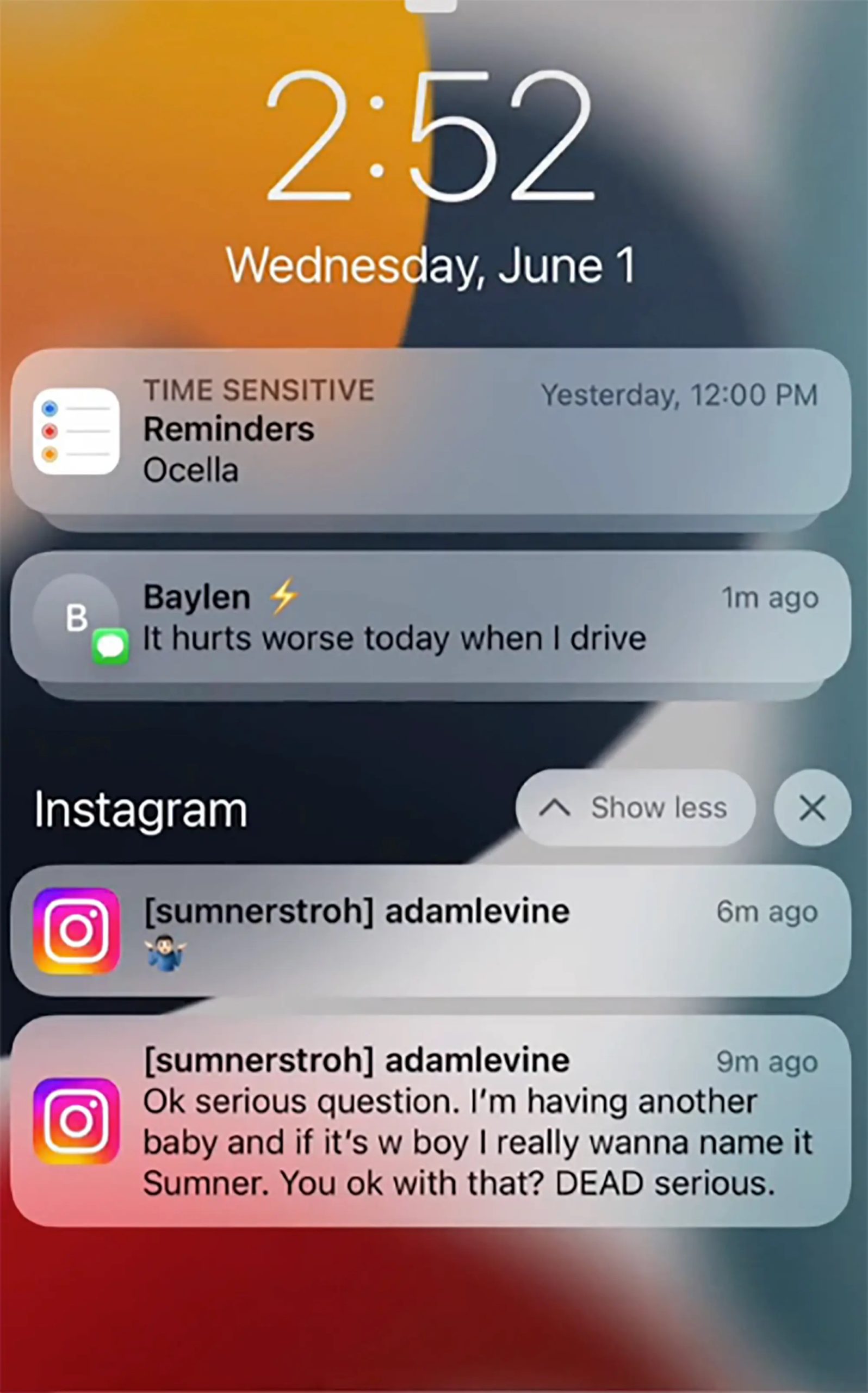 That’s right, he is asking the woman he cheated on his wife with if she’s OK with him naming his future son after her. Yikes!!! (Also whoever Baylen is, I hope they are doing OK.)

Finally, Sumner concludes that she never intended to come forward with this information, but after a frenemy attempted to sell screenshots of her conversations with Levine to a tabloid, she felt compelled to do so.

Anyway, watch the video for yourself:

embarrassed I was involved w a man with this utter lack of remorse and respect. #greenscreen

So what’s Jewish about all of this?

So, you know, pretty straight forward stuff and definitely not a stretch to give us a reason to cover this bonkers story.

On September 20, Levine took to his Instagram stories to “clear the air”:

“I used poor judgment in speaking with anyone other than my wife in ANY kind of flirtatious manner,” he admitted, though went on, “I did not have an affair, nevertheless, I crossed the line during a regrettable period of my life.”

“In certain instances it became inappropriate. I have addressed that and taken proactive steps to remedy this with my family,” Levine added, before concluding, “I take full responsibility.”

Adam Levine denies having an affair with model Sumner Stroh, but admits he “crossed the line”:

“I did not have an affair, nevertheless, I crossed the line during a regrettable period of my life.” pic.twitter.com/Ro9NcoZ41M

Baruch Hashem, at least it’s not a notes app apology!

At time of publication: no.

What has the internet’s response been?

Hoo, baby. Twitter has been making a ton of jokes about Adam Levine and the whole situation. Here are some of the most viral tweets about the situation:

Adam Levine drama is boring, but finding out he sexts like he's 17 and hasn't ever fucked is funny pic.twitter.com/8VZYyHUH9d

Adam Levine said SHE will be loved. Didn’t specify WHO. Pay attention people!

Adam Levine real piece of work …. Some men rly have the audacity 👎 pic.twitter.com/5Wvnr8dftD

Adam Levine’s sexual DMs are the Maroon 5 of sexual DMs, if that makes sense

Jokes aside, Sumner Stroh has received enough pushback from the internet that she made a second TikTok video. In the video, Sumner explains that during the affair she thought Levine and Prinsloo were no longer together.

Last question: However can Adam repent for his sins?!

Thankfully for Mr. Levine, Yom Kippur is just around the corner!

If he chooses to try to make amends in a Jewish way, Adam would engage in teshuvah or repentance/return. Though there is three-step process for atoning for sins against God, sins against other people can only be atoned for once they have been made right. In this case, Adam would have to offer a genuine apology to his wife and she would have to accept it.

Though there’s no way to know right now if Behati will accept an apology, based on Adam’s Instagram story, it seems that he is at least trying to offer one.

Regardless, being cheating on is extremely difficult for anyone, let alone someone who is pregnant and in the spotlight. I wish Behati all the best.