But if your foray into the psychiatrist-turned-villain comes from DC’s latest adaptation of Harleen Quinzell, you probably didn’t know that.

Following the erasure of Harley’s religious and cultural roots in the movies Suicide Squad and Birds of Prey, the new Harley Quinn animated series botched a golden opportunity for representation in pop culture. But not only did it take 10 episodes for the mostly Jewish writers’ room to hint at Harley’s Jewishness, there are anti-Semitic tropes abound throughout the show. Villainy aside, I expected DC’s raunchy animated series to make explicit that the bisexual, feminist, ball-busting icon is a proud Jew. So far, the two seasons have proved to be nothing but bad for the Jews.

But I’m getting ahead of myself. Let’s take a look at Harley Quinn in canon, and why the Jewish erasure of this queer, morally questionable, vivacious, and beloved by millions character pisses me the freak off.

Dr. Harleen Frances Quinzell of deep Brooklyn first entered the scene a little over 25 years ago in Batman: The Animated Series. Voiced by Jewish-American comedian Arleen Sorkin for 20 years, Harley was supposed to be a one-off character, but quickly became an unlikely fan favorite as the Joker’s court-jester girlfriend and sidekick.

Paul Dini had the blueprints for the Joker’s henchwoman and needed inspiration to bring the manic pixie nightmare to life. He found his muse in Sorkin, a dear college friend whose “screwball persona would be a good contrast to the Joker’s dangerous insanity,” he told Vulture. Born out of the “Borscht Belt” comedy scene, characterized by its liberal use of Yiddish, self-deprecation, word play, and other stereotypical Jewish traits, Sorkin’s cabaret aesthetic and deep Jewish roots gave way to the Yiddish spitting anti-villain Harley Quinn.

How’d Sorkin concoct Harley’s signature Brooklyn accent? She just read the script and figured “that was the best voice for her in the moment. Paul decided to make her Jewish, so I put a little Yiddish sound in there. At least we know the Joker isn’t an anti-Semite. It’s his only good quality,” she joked in the Vulture interview.

Over the years, the bold and brash character appeared in a plethora of storylines, and while her origin story as an Arkham Asylum psychiatrist driven to insanity by her evil boyfriend who pushes her into a vat of acid that permanently turns her into Harley Quinn has been tweaked over the years, one thing stayed the same: her Jewishness.

And I’ve got the receipts to prove it:

In the first 1997 issue of “The Batgirl Adventures,” Batgirl agrees to help save Poison Ivy and Harley exclaims, “Just for that, you don’t have to buy me anything for Hanukkah!”

In a 2007 issue of “Detective Comics,” before skeddadling away from a phone call with Commissioner James Gordon, Harley drops a Yiddish line: “Ver derharget (drop dead)!”

In an epic scene from the 2016 “Harley’s Little Black Book,” our Jewish Nazi slayer avenges the murder of her great-great-aunt Hazel and tells Adolf “Twitler” to “go to hell” before pummeling him to death. In DC’s 2016 “A Very Harley Holiday,” our titular Jewess dons a Christmas-colored corset and a menorah on her head. “My mom’s Catholic, an’ my dad’s Jewish, so when I was a kid we had both Christmas and Hanukkah,” Harley explains. And, for my favorite evidence of Harley’s Canhannukkahl Jewishness — thank you @Kibblesmith for this gem of a pun — “You’re not behaving like a proper Jewish girl,” some sick dude tells Harley in “A Very Harley Holiday.”

“I never behave like a proper Jewish girl,” Harley, in her black and red booty shorts, quips back. A Jewess through and through, the various depictions in comic books and animated series have Harley dropping Yiddish words like “plotz” and “oy” in her thick Brooklyn accent. Clearly, Sorkin’s Jewish roots run in Harley’s ink.

Voiced by Kaley Cuoco and written by Jewish showrunners Justin Halpern, Patrick Schumacker, and their non-Jewish colleague Dean Lorey, we first get a taste of what I’ll call “ironic anti-Semitic comedy” in the second episode of Harley Quinn.

Here’s the gist: Harley and her BFF (/soon to be lover) Poison Ivy crash the Penguin’s nephew’s bar mitzvah. The theme? Money. The giveaway? Bags of money. Drawing on boring Jewish stereotypes, shellfish is served at the religious celebration, and Harley points out the bar mitzvah boy is a lying, virginal tween who never “finger blasted a girl” at summer camp.

Here’s the thing: the Penguin — Oswald Chesterfield Cobblepot — isn’t canonically Jewish. So the writers went out of their way to reinvent his roots as a money-hungry, hooked-nose super Jewish villain. What the fuck?

On Reddit, Halpern addressed enraged Jewish fans and made this statement:

“We honestly thought all of those jokes were super-villain related jokes. Stealing the bag of money, etc. In retrospect I can definitely see where people could infer something different than that, but in the room, five Jewish writers all sat and wrote those jokes and it didn’t ring any bells for us.”

In another disturbing anti-Semitic episode, we see more Jewish caricatures reigniting the age-old myth of “Jewish lightning,” a damaging notion that Jews burn down buildings to collect insurance money.

In a conversation with Sy Borgman — an elderly former spy with cybernetic parts and Poison Ivy’s Jewish landlord — about what to do with the comatose bodies of Harley and her crew of misfits, his wife Golda says “a little Jewish lightning never hurt anyone.”

First of all, Borgman isn’t a landlord in canon, so you could say his occupation is merely another means to further the anti-Semitic trope of greedy Jewish landlords. Secondly, three of DC’s comic creators jokingly referred to him as “half man, half Jew,” which is so fucking gross and upsetting that a petition was made condemning the “hateful expression.”

“Had this vile bigotry been directed at any other minority in the world, these men would have been fired immediately, and the show canceled midseason,” the petition reads.

“It was something someone’s Jewish grandpa used to say, and it felt like this weird old-timey phrase that for sure is antisemitic, but when appropriated by a Jewish character and written by Jewish writers, felt to us like it was more of a Mr. Burns type joke.”

As for Harley and company’s funeral? The Borgmans decided the easiest and cheapest route is to cremate them. In an oven. I can’t be the only person whose mind immediately goes to the crematoria ovens in concentration camps when I hear of Jews being cremated in an oven, right? 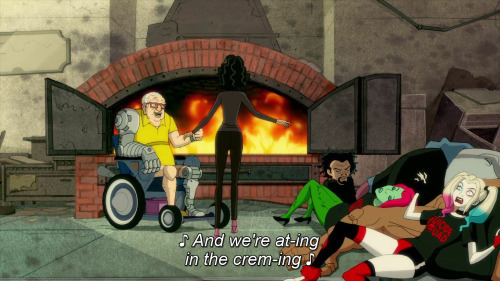 “It’s a fine line for sure, and for people who felt it crossed that line, I wouldn’t want to invalidate those feelings,” Halpern wrote on Reddit, in regards to the Jewish lightning joke. “I can tell you that a big part of being Jewish and dealing with anti-Semitism for me and the other writers, is being able to be self-deprecating and poke fun at ourselves, because in a way that feels empowering and takes the power out of the hands of people who hate Jews,” he added.

Sigh. There’s so much to unpack here, but I will say: “ironic” anti-Semitic comedy can only be empowering if you’re in control of your audience, which in this case most definitely isn’t exclusively Jewish. Furthermore, this shit can only slide if positive portrayals of Judaism are equally highlighted, which, dear Halpern, you epically failed to do.

Which brings me to my next point:

At last, Harley’s Jewishness is finally revealed in episode 10 of the first season of Harley Quinn. While in canon it’s her dad that’s Jewish, in the animated series, Harley’s mom Shannon is portrayed as a stereotypical Jewish mom from Brooklyn who just wants her daughter to stop “suckin face with that goyishe clown” and marry a Jewish doctor.

…But she is a Jewish doctor, Harley argues. Mrs. Quinzell’s usage of “goyishe” and obsession with Harley’s romantic life shows us that Jewish culture is a part of the Princess of Crime’s household. But that’s it, that’s all we get. It’s not so much offensive as it is upsetting that the only time Harley’s connection to Judaism is explicitly shown is to make Jewish moms the butt of the joke. Why can’t Harley be proudly Jewish in her own goddamn given right?

To their credit, I guess, in Season 2 I caught one glorious moment where Harley holds a menorah, and in another, Sy Borg saves the day by breaking through a dome using the oil running through his veins, which happens to be the same miraculous oil the Maccabees found in the ruined Temple’s rubble. A Hanukkah, or even a Passover episode, might be in the works for the third season, but until I see it, I won’t believe it. To be clear, I understand where the Jewish writers’ intentions lie in using anti-Semitic tropes as a form of self-deprecating humor, but that’s not enough. Even in the name of comedy, there’s no space to perpetuate anti-Semitism in jest when reinforcing Nazi theology can inadvertently be used as a tool to incite hatred in a viewer that knows little about the Jewish plight.

All this little Jewess is asking for is that the writers’ room restores Jewish glory to Harley Quinn, the reigning Princess of Crime whose fatal flaw is compassion. Take a page out of her book, would ya?