J.K. Rowling has a lot of problems. She’s defended Johnny Depp after he was accused of domestic abuse, tried to make her books retroactively progressive, completely nose-dived into cultural appropriation when writing about magic in North America, and is transphobic. Also, do you remember she named her one Asian character “Cho Chang”? Truly, yikes!

As someone who really, truly loved the Harry Potter books growing up — I still do, although Rowling makes it much harder — it’s been hard to take in. It’s hard to see her claim “Hermoine was Black!” when she explicitly wrote her as white. And it’s hard to see her denying the existence of trans folks.

The latest drama unfolded — where else? — on Twitter, where J.K. Rowling tweeted “#IStandWithMaya,” referring to a British woman who was fired for questioning why the British government should allow trans people to self-identify. (Read more here about the #IStandWithMaya thing here in PinkNews.) (Spoiler: It’s not her first foray into transphobia.)

The bravery of trans, nonbinary, and gender nonconforming folks who exist, persist and shine out in a world that tells them not to is magic. ✨

While people have been calling her out for transphobia, many have brought up the plethora of Rowling’s past missteps as well.

Why did you give the money goblins hooked noses, Joanne?

It's not just transphobia. Can we also talk about JK Rowling's anti-Semitic goblins?

For those who haven’t read or watched Harry Potter, a quick summary: Goblins are a creature in the magical wizarding world of Rowling’s creation. Let’s let the Harry Potter Wiki take it away from here:

Goblins are a highly intelligent race of small magical humanoid beings with long fingers and feet that coexist with the wizarding world. Their diet consists of meat, roots, and fungi. Goblins converse in a language known as Gobbledegook, and are adept metalsmiths notable for their silverwork; they even mint coins for wizarding currency. Due to their skills with money and finances, they control the wizarding economy to a large extent and run Gringotts Wizarding Bank.

In the movies, this is what goblins look like: 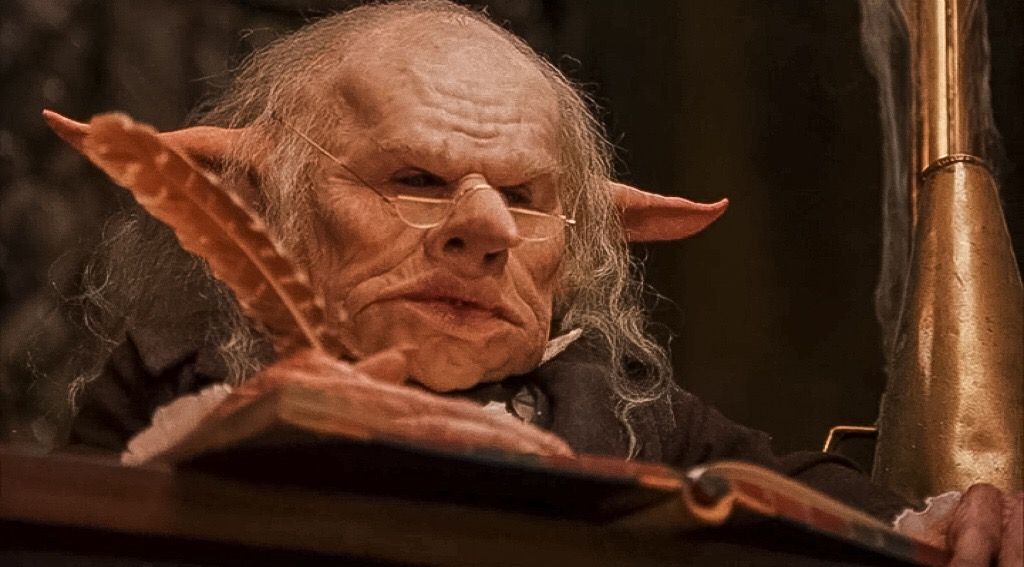 Greedy, hook-nosed, bank-controlling people? Doesn’t sound great. Not only does it not sound great, it sounds like a super anti-Semitic stereotype.

Let’s back up a second: J.K. Rowling has been on the record calling out anti-Semitism. I even wrote about it here on Alma last year. (I’ve also written about her history of problematic statements.) As Stephen Richer points out in Moment Magazine, “The debate over whether the goblin character has its roots in anti-Semitism is wholly unaligned with Rowling’s professed views on Jews.”

Rowling has also gone on the record about comparing her fictional Death Eaters to Nazis, writing, “If you think this is far-fetched, look at some of the real charts the Nazis used to show what constituted ‘Aryan’ or ‘Jewish’ blood. I saw one in the Holocaust museum in Washington when I had already devised the ‘pure-blood,’ ‘half-blood’ and ‘Muggle-born’ definitions, and was chilled to see that the Nazis used precisely the same warped logic as the Death Eaters.”

However, just because one professes to be against Nazism and fascism does not mean one can’t be anti-Semitic or make anti-Semitic statements. Standing up against one thing doesn’t automatically exonerate you from all other things! That is not how life works!

Connor Goldsmith, a literary agent, explained to me over e-mail that “Rowling’s goblins are nakedly anti-Semitic caricatures — a race of gnarled, hook-nosed misers obsessed with gold, who believe they own everything they’ve ever produced and wizards who purchase things only ‘rent’ from them. They appear to run the entire wizarding economy, and trust no one but their own kind. It’s suggested that secret cabals of goblins work to undermine the wizard government. The fact that these creatures appear in a book series which is ostensibly an allegory for the Holocaust is as distressing as it is bizarre; one hopes Rowling didn’t intend to create such a caricature, because it really undermines her project, but intent isn’t really what matters at the end of the day.”

On Twitter, others pointed out that the floor of Gringotts, the bank where the goblins work, contains Star of David patterns. Even if this was a misstep of the production — and not a fault of Rowling’s — it is wild to think that no one found this problematic.

You can see them in this clip:

And that brings up a larger question of whether intent matters. Many say that no matter the intent, it’s how it’s received, and how other people can read it. Basically, even if you intend to write against the rise of fascism and the dangers of Nazism, you can still fall into anti-Semitic tropes. (When I reached out to Rowling’s team for a comment, a representative declined to comment.)

As Dan Kahan wrote in PopDust earlier this year, “Rowling almost definitely didn’t do this intentionally… Rowling also borrowed and pastiched from all sorts of fantasy and folklore while writing Harry Potter, so it’s likely that a lot of the goblins’ more anti-Semitic features are actually related to older fantasy fare surrounding bankers. It just so happens that those were probably inspired by anti-Jewish propaganda.”

He continued, “Of course, the intention hardly matters. The fact of the matter is that the Gringotts Goblins are absolutely coded as anti-Semitic Jewish stereotypes, propelling an image that has been and continues to be used against Jewish people by supporters of racist and nationalist ideologies.”

When I asked in my work Slack if people thought the goblins in the Harry Potter series were anti-Semitic, one colleague argued that her “intent matters a great deal,” and we should look at Rowling’s statements about anti-Semitism as a sign that there was no inherent anti-Semitism on Rowling’s part. Another echoed this, arguing context matters. Yet another pointed out that while Rowling probably didn’t mean for the goblins to be anti-Semitic, there’s a lesson to be learned in “how caricatures can unconsciously reinforce negative stereotypes.”

When it comes down to it, we can only guess what Rowling intended. But whatever we think — and whatever the actual intent was — does that outweigh how the goblins are perceived? Does that outweigh perpetuating dangerous anti-Semitic stereotypes?

I’m not exactly sure where I stand.

Yes, I can still recognize the books for how magical they were for me as a child, while simultaneously acknowledging how problematic many aspects were — not just the goblins. (Again: Cho Chang.)  Yet, as Goldsmith wrote to me, “This is one thing about Harry Potter that’s bothered me ever since it was pointed out to me as a kid, and it has only grown more poisonous for me with time.” Which is the perfect summary of Rowling.

All I know is: I remain disappointed in J.K. Rowling, but no longer surprised.