The new film Operation Finale tells the true story of the capture of Nazi leader Adolf Eichmann, following the Mossad team that traveled to Argentina to bring Eichmann back to Israel to stand trial.

Quick history lesson, for those who missed Rachel Bloom’s magnificent Drunk History episode about the same event: Eichmann was one of the key architects of the Holocaust. He was present at the infamous 1942 meeting, the Wannsee Conference, where the Nazi leadership planned the Final Solution (a.k.a. the murder of millions of Jews). After World War II ended, Eichmann escaped to Buenos Aires, Argentina, where he lived as “Ricardo Klement.”

Operation Finale opens with a young girl in Buenos Aires, Sylvia (played by Haley Lu Richardson), who starts dating a German, Klaus Eichmann (played by Taylor Swift’s boyfriend, Joe Alwyn). When Sylvia takes Klaus home to meet her father — who survived the death camps, which Sylvia doesn’t know — the wheels get set in motion for the identification and capture of Eichmann.

The Mossad team responsible for the capture of Eichmann was composed of Holocaust survivors. They all wanted to murder him, naturally. This tension plays out in the film — how do they keep Eichmann safe and alive to transport him back to stand trial in Israel? How can they succeed in their mission?

The answer? Rafi Eitan, the head of the operation, who stops his team from killing Eichmann. Eitan, born in northern Israel in 1926, is played, in an inspired casting choice, by Nick Kroll.

At Alma, we had the opportunity to chat with Nick Kroll about his role, the significance of the film, and working with Israeli superstar Lior Raz.

This is totally a change from what you normally do, so I was sort of surprised to see you in this film. How did you end up in this role?

I got a call from my people saying there was this film that was being directed by Chris Weitz, and starring Oscar Isaac and Sir Ben Kingsley, and it just seemed like, what an awesome group. I’ve known the story for a long time. It just seemed like a no-brainer for me to hopefully be involved. When I saw the film, your character always got a lot of laughs. How did you approach being more of a comic relief in a film that deals with such heavy material?

Well, like in real life, incredibly tense moments are relieved, at times, with humor. Sometimes, it fills the room with a little more buoyancy. And specifically, it’s such a Jewish thing to find humor in complicated moments.

In the case of Rafi and [Peter] Malkin, played by Oscar Isaac, these are clearly guys who have been friends for a long time, and both use humor to both make their points, to ease the tension at times, and to have fun with one another. Matt Orten wrote the script, and as I read it, I was like, Rafi’s got little jokes here, little moments! In the appropriate time, it was useful to use [his humor] and at other times, there’s no joking around. It was fun to be able to play all the different colors.

In the film, obviously, a lot of the men struggle with being in the presence of Adolf Eichmann — and Rafi has to stop them from killing him. What do you think you would do if you were in their shoes?

Well, it’s tough to say. I’d like to believe I’d do what Rafi did, which was [stick to] their mission: capture Eichmann, extract him from Argentina, and bring him back for trial in Israel. 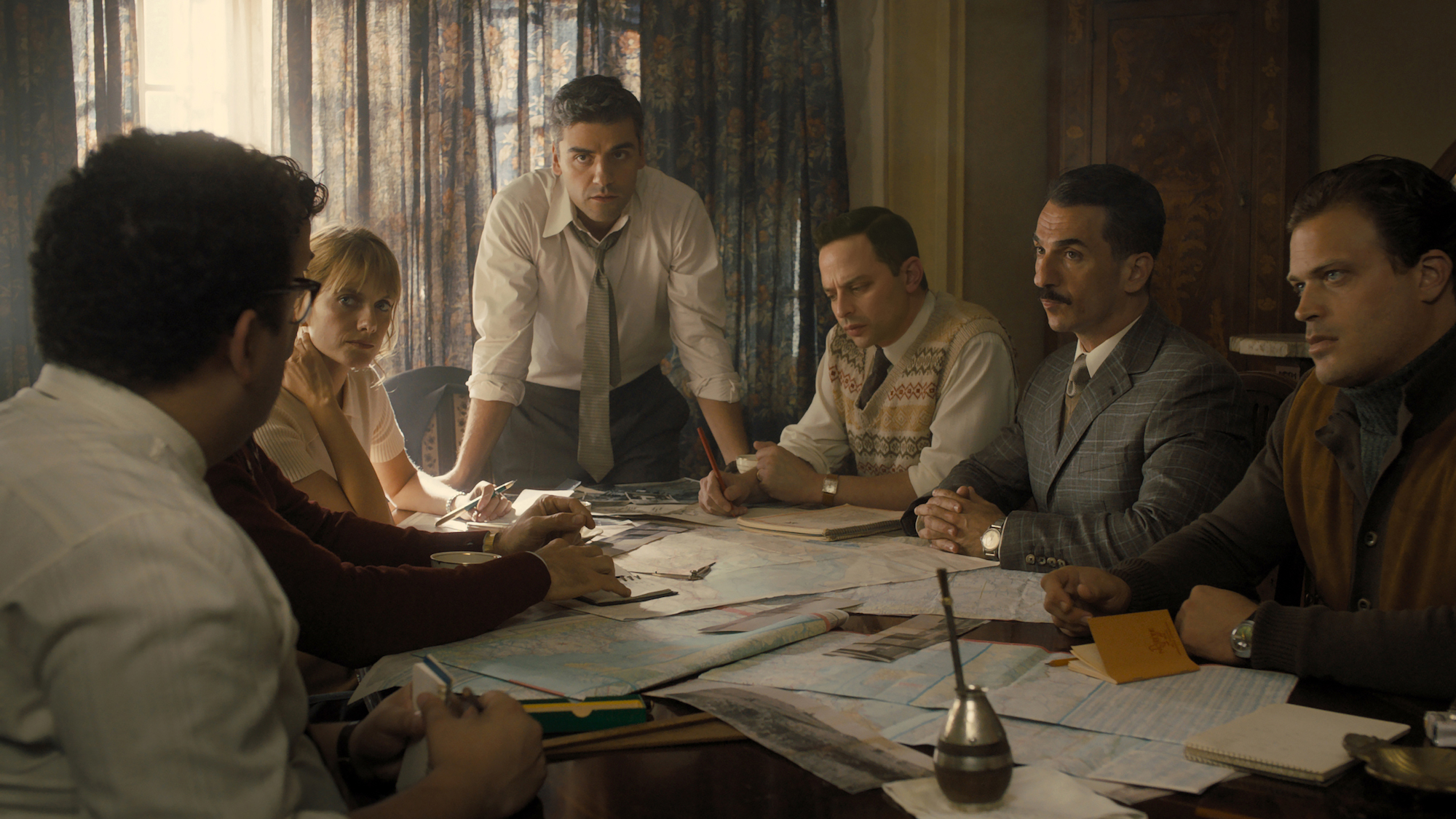 [I’m] an American-born Jew who’s lost some distant relatives [in the Holocaust] — my mother’s father’s family was in Austria, but my grandfather himself and his immediate family had left before the war. The movie explores this; if you had people directly in your life who died or who were killed in the Holocaust, it’s so hard to say what your reaction would be. And I would say the same for myself — as someone who’s an American-born Jew, now a few generations removed from the Holocaust — I’d like to say that I would be someone who would be seeking justice in a trial for Eichmann.

I think it’s a really interesting and useful lesson, now as much as then, about whether we try to seek justice or vengeance. Vengeance oftentimes perpetuates the cycle of violence and hate.

Why do you think this film is so important today?

Unfortunately it’s as relevant now as it was then. Obviously, there’s a rise again in anti-Semitism — but also racism and xenophobia, right-leaning fascists, and totalitarian regimes around the world. There continue to be genocides and Holocausts to this day — you don’t need to look any further than Syria to see that this is still going on.

We have a responsibility as fellow humans — and also as people who know what it is like to have gone through a genocide — to do our best to end the conflicts where these genocides are still happening. And, it’s our responsibility not only to never forget, but to do our best to never let it be repeated, to Jews or to anyone around the world who is being discriminated against or terrorized for who they are.

Have you met the real Rafi Eitan?

I have not. I went to the Museum of Jewish Heritage, which was very helpful — there was a full exhibit about Operation Finale [that] allowed me to get exposure to a lot the actual pieces of the case itself, it was pretty neat.

If you did meet him, what would you ask Eitan?

He was so involved with the logistics of putting the team together and managing all of the different energies and personalities — so I guess I would ask him what he found to be the most difficult element of the operation on the logistics side.

A lot of your scenes are with Lior Raz, who plays Mossad director Isser Harel. What was it like working with Raz? And have you seen Fauda? I hadn’t watched [Fauda] before meeting him, and I’ve obviously since watched a lot of it, and he’s such a wonderful guy. One of the best things about doing this film was getting to know him. He’s a guy who’s worked so hard for so long in doing all this stuff, then he comes out and creates Fauda, which becomes such a big hit.

He’s incredibly smart and hardworking, and such a lovely guy to spend time with — and also a guy who, having spent time in the special forces in Israel, understood some of the things we were doing in a different way and was able to sort of inform us about what protocol would actually be going down. Even though he wasn’t in the Mossad, he understood things in a way that we might not because we hadn’t been exposed to that kind of activity. It’s one of the great joys for me, coming out of the movie, was getting to know him.

Not on the topic of Operation Finale, but can you tell us anything about Big Mouth Season 2?

It’ll be coming this fall. If you can believe it, there are many more awkward, embarrassing stories to tell about puberty. A couple big new characters coming in. The Shame Wizard, portrayed by David Thewlis, an incredible actor who is in Fargo season 3, the bad guy in Wonder Woman, [Professor Lupin in] the Harry Potter movie — a truly spectacular actor. And Gina Rodriguez will be a love interest for Nick this season. And a number of other great guest stars. I’m very, very excited for people to see it.

We loved season one, especially the bat mitzvah episode.

Ahh, yeah. Thank you. One of my favorites.

You know what I have not seen, but I don’t quite know why, is an everything bialy. These days, my ideal bagel is a bialy. I’ve gotten more into the Montreal, the thinner bagels. I mean, I think you can’t go wrong at Russ & Daughters. For my money, that’s the best sort of spread you can get.

This interview has been edited and condensed.