Last night’s episode of Broad City was their most Jewish one yet — and that’s really saying something. The show has never shied away from Abbi and Ilana’s Jewishness, from scenes at a shiva to a parody of Birthright to an entire episode set in a Florida retirement community. But “Lost and Found” took the show’s Jewiness to a whole new level, and it really paid off.

There were so many perfect Jewish moments and references that I just need to go through the whole episode chronologically and break them down for you, okay? Okay. We begin with a scene of Abbi and her new girlfriend, Leslie, who has just given her an atrocious yellow hat. Abbi is clearly unsure if this is the right look for her and suggests maybe it just doesn’t fit; Leslie assures her she can always use a bobby pin to hold it down like “they do with the… um…” Abbi finishes her thought with, “Yarmulkes.” Leslie is surprised Abbi so quickly came up with the word for the Jewish head covering, asking how she knows it. “I’m 100% Jewish,” Abbi says, which Leslie finds hilarious, furthering the running joke throughout the entire series that Abbi somehow doesn’t seem very Jewish. One minute in and we are already Jewing it up. Moving on… Right after the opening credits, we cut to Ilana, who’s FaceTiming with her mom after receiving her “Genes & Me” test, clearly a parody of the popular 23andMe genetic testing kit. Before we get into her results, which are obviously 100% Ashkenazi Jew, let’s talk about Ilana’s two necklaces: a very large gold Star of David, and a name necklace that spells out Ilana in Hebrew (the name necklace appears to be a nod to Sex & The City, which will come up later in the episode). Ilana wears these necklaces throughout the entire episode, and let me just say, after last week’s “Jewess” earrings, this show is not playing around with its amazing Jewish jewelry.

But back to the results: Yes, Ilana is pure Ashkenazi. “Yeah, no shit, ever seen a mirror?” her mother, the inimitable Susie Essman, quips. Ilana goes on to list her inherited histories: anxiety, poor eye sight, IBS, Tay Sachs disease, cystic fibrosis, and Fragile X syndrome. Unfortunately, these are all indeed very Jewy conditions. But this is good news for Ilana, who wants to write about inherited mental disorders for her grad school application personal essay (she recently decided to go back to school to become a therapist, another very Jewy trope). Abbi then turns her results sheet over to find out she has “the richest history a millennial Jew can have.” That’s right: She’s related to a Holocaust survivor (cue “Hava Nagila.” Literally). Turns out Ilana’s 16th cousin, a Holocaust survivor, lives right in Manhattan, so she and Abbi decide they must go visit him immediately as survivors are dying out. Ilana is excited to learn both about his story, and therefore her history, as well as their shared mental illness (yes, she is assuming the Holocaust survivor has mental illness). And so we meet the Holocaust survivor, Saul Borowitz, played by 90-year-old actor Jerry Adler. Fun fact: Adler was born in Brooklyn and raised in an observant Jewish household, so Broad City is really keeping things #authentic. Saul plays dead for Abbi and Ilana when they first walk into his room at an assisted living facility (“I knew I shouldn’t have stopped at Sephora before I came here!” Ilana says while ripping off fake lashes) and then screams, “Gotcha! Works every time.” This feels very true to me: Jews are known for turning to comedy to get through trauma, and old Jews especially are the ultimate jokesters.

Ilana tries to engage Saul in a conversation about inherited trauma, stories from the old country, and “Nazi shit,” which Saul promises to do if they help him get out of the home for a little while. Abbi replies that the woman at the front desk told them they can go anywhere on the third floor, but Saul insists on leaving the building entirely. “I’m sorry, Saul, we can’t. I mean, we’re just following orders,” Abbi says, to which Saul responds, “I’ve heard that one before.” Holocaust survivor + Jewish guilt = the two sneak him out of the building by rolling him up in an area rug. I’d like to point out here that all the background music in this episode is very Klezmer-y, and it just works.

Survivor on the Loose When Abbi and Ilana realize Saul is missing, they freak out. “We cannot be losing Holocaust survivors, not now that the world is gaining Nazis somehow!” Broad City has been killing it with the political humor ever since Trump was elected, and this one — so sad, so true — made me lose my shit.

Abbi starts to game-plan: “Where would a Holocaust survivor go? Um… okay, think think think… pickled herring…” Which brings us to: Of course Zabar’s is the first stop: The iconic Manhattan supermarket is known for its particularly Jewy spread of bagels and smoked fish. “To the mayo-based salads!” Ilana declares upon entering. They don’t find Saul there, but before heading out, Abbi makes an important point, saying, “Okay, I’m never up here, and the babka is insane. We gotta get some while we’re here.” (It’s true, their babka is very, very good. I’d also recommend the rugelach.) Abbi grabs a couple loaves while Ilana gets some whitefish salad, and then they’re off to the next destination. Where else would a Holocaust survivor go? Let’s ignore the fact that a Holocaust survivor might not want to spend his one free day in the city at a museum dedicated to the horrific genocide he lived through in actual life. And let’s also ignore the fact that there isn’t actually a museum in New York called “The Holocaust Museum” (though there is one called the Museum of Jewish Heritage, known as a “living memorial to the Holocaust”). Let’s just talk about the brilliance of this scene.

We pan to Ilana and Abbi leaving the museum, with Abbi saying, “Wow, we really got lost in there.”

“You can’t rush through,” Ilana says.

“No, no. The resilience of the Jewish people is just astounding. We got to keep educating ourselves, ya know? Truly…”

The two complete her thought at the same time: “Never forget.”

And then they realize they have forgotten about the actual Holocaust survivor in their care and set off again to find him. But “where else would an old Jew go?” “Jew magnet!” Ilana declares. It’s okay when Jews say it. The pair then get distracted by shopping for themselves (“You just can’t pass up a sale like that.” “No, you find the best stuff when you’re not looking.” “I mean we weren’t trying to shop, we had to.” Nota bene: I’ve had this actual conversation with my mother so many times it’s not even funny).

It’s now time for Abbi and Ilana to face up to the fact that they’ve lost Saul and must go back to the assisted living facility and own up to it. The frustrated administrator explains that he must have gone to IKEA, which is where he goes every time he escapes. She insists that Abbi and Ilana must go to IKEA to fetch Saul.

It All Comes Back to the Holocaust Abbi and Ilana finally find Saul in an IKEA in Brooklyn, and he asks if they can grab some meatballs before returning him home. Ilana asks, “So, what’s up with the IKEA fetish?” This is when we get to the heart of the episode. “When I escaped from the camp, I wound up in Sweden. And those people, the Swedish people, they were so good to me, and their furniture was so elegant. So this is like… retail therapy.”

“Well we had a great day with you,” Ilana says. “Thanks for sharing it with us. We learned so much from you, Saul. And also, the Holocaust Museum of New York. We just stopped by.”

The Jewish Moral of the Story 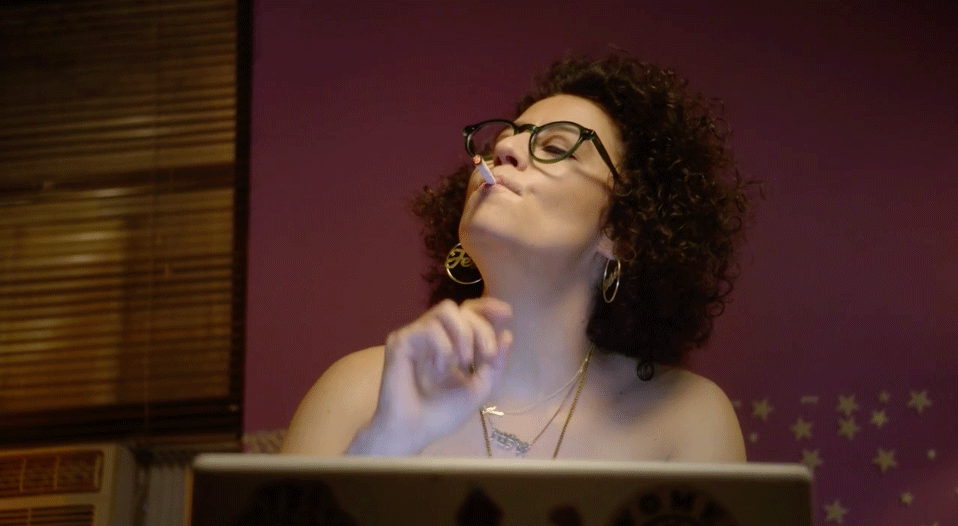 We end the way all good Sex & The City episodes end, with Ilana typing into her MacBook while her voiceover narrates what she writes. “I couldn’t help but wonder… I used to think being Jewish meant IBS, Tay Sachs, inherited trauma, and childhood contact lenses. But now I know being Jewish is about being resilient, having the strength to survive the Holocaust and perpetual exile, as well as being able to carry a stag table to the parking lot of an IKEA at 91 years old… And I hope you have the strength to accept this little Jew into your psychology program. Shalom.”

And there you have it, folks. The most Jewish episode of Broad City ever. This episode made me feel seen, made me laugh out loud so many times, and made me that much sadder that this show is coming to an end with this season. Will we ever get a more perfect representation of Jewish millennial women on TV? This little Jew surely thinks not.