I never went to sleepaway camp. I went to day camp, but we all know that’s not the same. As soon as I was able to, I started tennis camp where I would train everyday, morning until night. Instead of bunks, color war, and bug juice, it was watered-down Gatorade (it’s a thing, trust), medical tape, sock tan lines, and conditioning for me.

To be honest, I’m super grateful for that experience. The eventual outcome of all of that was some lifelong friends, a strict and enduring work ethic, and my college tennis career. I wouldn’t be who I am today without those summers spent training and traveling for tournaments.

That being said, I was so beyond jealous of my friends who “lived 10 months for two.” When it came time for them to pack up every color Soffe short and Undee Bandz in sight for camp, I’d grab my racquets and head to the court with a serious case of FOMO.

Flash forward to 2016, when I was having dinner on the Upper West Side with one of my closest friends. It was a stunning summer night and we were probably a half glass of wine in when she leaned in and said, “Just so you know, I have your bachelorette party planned.” Mind you, I was not engaged at the time. I wouldn’t be engaged until March of the following year. But I had been with my now-husband for seven years at that point (after meeting him on Birthright in 2010 — and no, we didn’t get a free wedding, unfortunately — but maybe that’s a story for another day) and the ring was picked out so it wasn’t TOO crazy to talk about this, right?

She asked me if I wanted to know what her idea was, and after some back and forth, I finally said yes. “’Camp Jessie,’” she blurted out. Almost immediately, images of matching shirts, color war, lakeside lounging, and lanyard-braiding flooded my brain. I was ecstatic and couldn’t contain my excitement. My friend, who eventually became one of my maids of honor, is brilliant and I’m forever grateful for her suggestion. But still, there was that whole needing-to-get-engaged thing.

In March of 2017, when my soulmate, my beshert, proposed to me at the Metropolitan Museum of Art in New York City, it was officially not weird to start planning my bachelorette party. Instead of building Camp Jessie from scratch, I worked with my friends to research adult summer camps. I stumbled upon one in Connecticut: Their Instagram was filled with photos of banana boats, air-conditioned bunks, adventure courses, ‘90s themed parties, and color war. I was immediately in love — I knew this had to be where I celebrated with my girlfriends. As soon as I chose the place and the weekend, I was told that the rest was out of my hands. My bridal party would take it from here — and did they ever!

In July of 2018, we boarded a bus (provided by the camp) to take us to the camp. My friends made goodie bags for everyone filled with Camp Jessie Mad Libs and games, lanyard to stitch, candy, and more. When we arrived, a bunch of my friends were already there. I was greeted with hugs and excitement which left me practically crying tears of joy — I was so excited to be with 21 of my closest friends for three days of the camp fun I’d been looking forward to my entire life.

Upon entering my (did I mention air-conditioned?) bunk, I actually burst into tears. Camp Jessie branded pillows, water bottles, duffel bags, and tank tops covered the bed. Slap bracelets, tattoo necklaces, bride crowns, and temporary tattoos of my husband’s face were scattered everywhere. And streamers and balloons galore covered the bunk. Not to mention there were fully stocked mini bars in every cabin — not quite the authentic camp experience, but an update I readily appreciated. First thing’s first: We popped some champagne and headed to dinner. Wine lined the long biergarden-style dinner tables under a big white tent. There were hundreds of other “campers” as well, consisting of other bachelorette and bachelor parties and groups of friends. There was a DJ and live music that accompanied the (surprisingly) delicious buffet dinner. We danced on tables and made some new friends. I looked around at my group and couldn’t help but be filled with so much love. I don’t have a single group of friends — they’re scattered from different parts of my life and plenty of them had never met. But as I saw them singing and dancing together, it was a reminder of how totally wonderful, accepting, loving, and welcoming all of my friends are, and how lucky I am to have them.

The next morning started with lakeside yoga which was arranged specifically for our group, then there was some “free time” to explore the camp however you’d like. Ropes courses, lake activities (floats, trampolines, banana boats, etc.), mixology classes, trapeze, and more. And then, of course, there was color war. This involved face paint, balloon tosses, relay races, and dizzy bat. After the winner was crowned we went to a happy hour, which included a giant slip and slide, kegs galore, and a barbecue. After a few hours, everyone went back and got changed into their ‘90s themed outfits for the night.

We of course started the night by taking a million photos in our flannel, tattoo chokers, skinny sunglasses, and band tees before heading to dinner where we were welcomed with what had to be a ‘90s themed Spotify playlist blaring over the loud speakers. As dinner progressed, a cover band set up to play some of our favorite ‘90s and early ‘00s songs before we made our way down to the canteen. There we danced for hours and took photos on a “Friends” themed set-up. 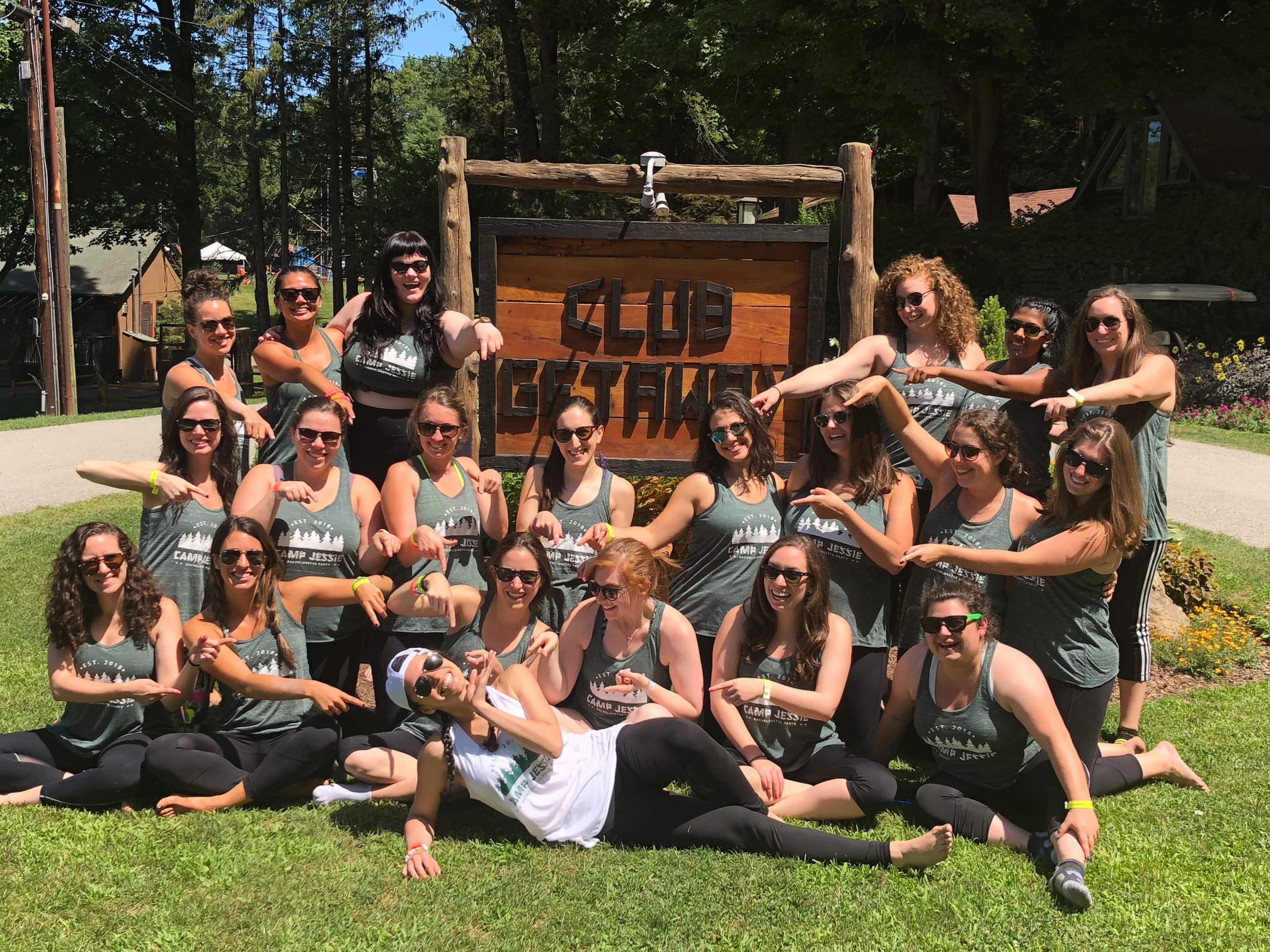 The next day came the rain. It ended up pouring for about 40 minutes, with all of us huddled under the meal tent. My friends told me that this was just the cherry on top to a “real” camp experience: playing indoor games and ducking for cover. Almost immediately after the storm cleared we were back outside again playing archery, hanging by the lake, and soaking up our final few hours of camp. I was holding onto every moment for dear life — it was the greatest.

As we boarded the buses home, everyone donning their new Camp Jessie duffel bags, I was so sad and happy all at once that the best weekend ever was coming to a close. I don’t want to say that my bachelorette party completely made up for those missed sleepaway camp years, but there’s something to be said about going as an adult with lifelong and newer friends, escaping our jobs and responsibilities for a place where we can all just have fun and be ourselves.

And the best part? The friendships that were made between my friends who had never gotten the chance to meet each other before. Now when I see them writing on each other’s walls for their birthdays, wishing their “camp friend” another year of happiness, my heart fills all the way up.