Growing up, we used my late grandmother’s menorah every Hanukkah. To be honest, I never really cared for it. It was a strange-looking thing, made of some kind of heavy greenish-gray metal with abstract squared-off shapes that were supposed to resemble flames, I think, making up each of the candle holders. I preferred the classical, ornate Renaissance-inspired silver Judaica I saw at the Minnesota Institute of Art, with their scrolls, lions, and delicate furls. It all seemed so much more elegant than the bizarre, modernist, clunky thing we had at home.

Since my grandmother died before I was born, all I know of her is from the material objects she left us — jewelry, a few books, and her menorah. As an adult, reflecting back on it, I realize how unusual it is for someone who was otherwise fairly traditional to have a menorah like this one. It’s an object that suggests she kept a Jewish home, yes, but she did it on her own terms. It’s a piece that implies continuity with past religious traditions but a modernist embrace of the new, the unfamiliar, the unusual. You might even say that her choice was a feminist one, in that it was a subtle but meaningful break from traditional, conservative forms. All that in a menorah.

Today, there are many artisans and artists working in exactly this space, exploring how the Judaica, or Jewish ritual objects, we use can open up new ways to practice millennia-old rituals while recognizing more progressive, liberatory visions of humanity. These religious artifacts are not simply kitsch, a style that Milan Kundera once described as “the principal enemy of art.” (Not that there’s anything wrong with a Ruth Bader Ginsburg menorah, if that’s your thing.) They are created by craftspeople and artists who think about their practices, the form of the object, and the way it is used intentionally in ways that include queer, feminist visions of Jewish life. The ornamental, baroque designs of traditional Judaica are fragile, difficult to use, and often made by men, with a limited role for women. The team at the New York City-based company Via Maris has decided to address this head-on by creating ritual objects that are explicitly modernist in design, with simple, clean lines and durable materials.

But what is most remarkable about this outfit is that they employ female scribes, or sofiret, to write the scrolls for their mezuzahs. Allowing women to act as scribes is still controversial if not outright forbidden in some Conservative and Orthodox communities. Those who affix one of these mezuzahs to their doorframe are implicitly acknowledging “the idea of equality between men and women in Halacha and religion,” as one sofrot, Rabbi Hanna Klebansky, put it in an interview with The Jerusalem Post. 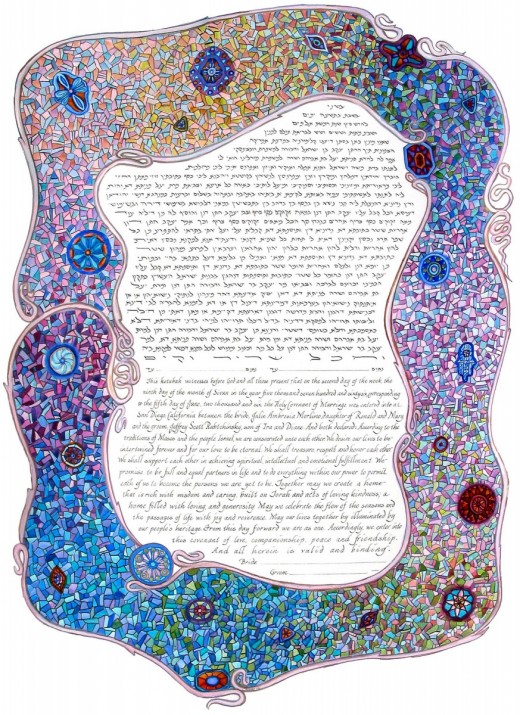 One domain where female scribes have been most active is in crafting ketubahs, the ornate illustrated contracts traditional for Jewish marriages. Miriam Karp, an artist based out of Atlanta, is one such artisan. She makes illuminated ketubahs that use both traditional and contemporary design elements.

What makes her work unique is her openness to and explicitness about creating these contracts for anyone who wants one. Same-sex and interfaith couples often struggle to find acknowledgement and acceptance within traditional Jewish practices. Karp is more than willing to create a ketubah that not only honors their union, but also incorporates imagery reflecting their lives.

Mika Benesh is an artist based in Sydney, Australia working in a variety of mediums, including object design and textiles. Most recently, he developed a series of Judaica from a “queer, feminist, and Jewish liberationist” lens. These objects, which include a seder plate, a two-handled natal (hand-washing cup), and a tzedakah box, do not hide their hand-crafted nature while also exemplifying clean, clear modern design.

Most striking about this series is the way Benesh uses weaved beeswax (sourced from his beekeeper father!) to create the molds for the bronze-cast objects, which are later silver-plated. In each piece you have the connections between traditional crafting methods and a vision for more inclusive Jewish ritual practices. The sheer creativity and intentionality of each piece shows just how engaging and exciting this kind of craftsmanship can be. Studio Armadillo partners with local artisans to craft their pieces. Using local workshops instead of commercial factories is an important choice, one that centers community connections and empowers workers (as opposed to large-scale mass production). Advah Designs makes stunningly beautiful tallits, or prayer shawls, in partnership with textile craftspeople around the world. They are intentional about seeking out artisans with environmentally sustainable practices who pay fair wages. Founder and designer Sarah Resnick creates both modernist and traditional tallits that exemplify the inclusive vision she has for these important ritual objects. The team describes itself as “living out our Jewish values in each item” they create.

Advah Designs also sponsors the bi-weekly podcast “Fringe” which highlights the experiences of trans and gender non-conforming Jews with tallits and tzitzit and is hosted by Emma June Youcha, who ties the tzitzit of each of Advah’s tallits.

Rachel Bloom (as in the star of Crazy Ex-Girlfriend) showed off her bespoke Labia Menorah in 2018. Who among us hasn’t thought of this pun? I’m not sure my grandmother would have approved of taking things quite this far, but she gets points for making the joke a reality (though I’m incredibly sad to report it’s not available for purchase anywhere).