For jewelry designer Ariel Tidhar, there’s always been two constants in her life — her strong connection to Judaism and her passion for all things creative. Growing up in a Conservative Jewish household in Rogers Park, Chicago, Ariel was raised to be proud of her Jewish identity. In fact, she tells Alma, “I would always tell everyone I was Jewish. Everyone just needed to know.” This strong sense of self was something she took with her when she moved to New York for college and decided to study fashion design.

However, it was not until her second year at Pratt Institute that she realized she could merge the two worlds together through her creative practice. 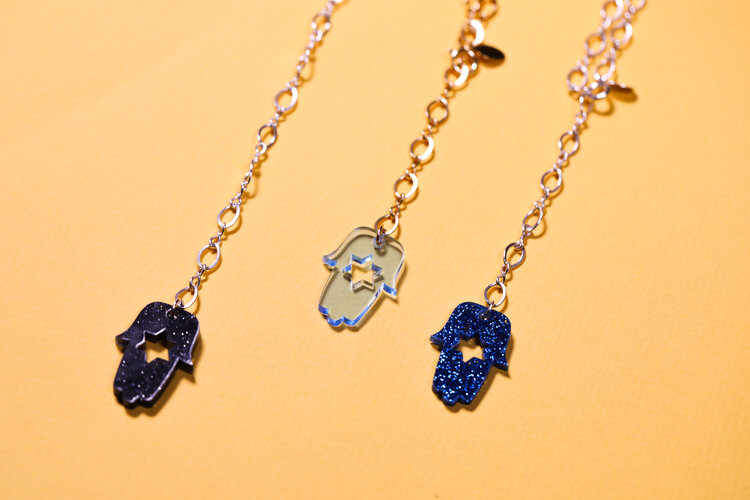 Now 25 years old and living in Brooklyn, Ariel is the mastermind behind her namesake collection of contemporary Jewish jewelry and accessories. Making everything from “Oy Vey” hair clips and metallic scrunchies to hamsa earrings and pomegranate rings, her pieces are quickly gaining a cult following on Instagram. It’s no wonder Ariel’s barely two years old company is quickly becoming a fan favorite — her designs are on-trend, affordable, and most importantly, fun! Plus, her feed has also become an inclusive, welcoming space for all kinds of people, whether they’re Jewish or not, which makes us like what she’s doing even more.

Alma spoke with Ariel about how she got into jewelry design, her love for the pomegranate, and so much more.

When did you first start making jewelry?

My mom studied fashion design and my grandmother was a seamstress, so by the time I was 8 years old, I was taking sewing classes. By 10 I declared I was going to be a fashion designer. I went on to study fashion design at Pratt and then began making jewelry after school.

I couldn’t find full-time work and I didn’t really want to be around clothes at the same time. But I needed a creative outlet while I was in the midst of interviewing and stuff like that. And I needed to make money. So, I started making enamel pins and then a few other bits. Then I started making hamsas and maybe six to eight months after that, I started making jewelry.

It seems like you grew up around a lot of creativity, but how did your Jewishness play a part in that? When you started making jewelry, how did you decide to bring those two worlds together?

My whole life, the two biggest pillars for me have always been being creative and being Jewish. I grew up in Chicago in a black hat [ultra-Orthodox] neighborhood but my family are not black hatters. My dad’s from Israel and I grew up spending a lot of time in Israel. And the year before my senior thesis in school, I spent the summer in Israel.

I think around my sophomore year of college, it kind of just clicked that [my Judaism and creativity] could exist together. After that, every design project going forward in school was Jewish-related. Once that light bulb went off, I became the Jewish girl in the design department. There was no going back for me because it made sense and felt like the most genuine place for me to be.

And then my whole thesis was about being Israeli-American and this weird push and pull of not being American enough for my American friends and not being Israeli enough for my Israeli friends. It’s been really fun because I never set out to be a Jewish brand but now it’s really turned into this community of people that never felt like they had access to the right Judaica.

You’re creating these modern interpretations of symbols that have been important to the Jewish people since forever. Can you talk more about that?

For me, it’s not necessarily a modern interpretation, it’s more of just what I like in design and mixing that with Judaism. Even if it wasn’t a Jewish collection, it would still be funky and really colorful. The whole brand basically started because of the pomegranate. I had a whole pomegranate print that I did in my thesis in school and I became obsessed with its shape and the idea of the pomegranate as a symbol of abundance. It’s also a nice alternative to the Jewish star.

I have a lot of customers who don’t feel comfortable wearing the Jewish star, especially given what’s going on in the United States and also the world.

Where did your interest in the pomegranate come from?

I fell in love with pomegranates after a visit to Tzfat, the Kabbalah center of Israel, per se. There’s this beauty of it connecting to Judaism. It’s a little bit more modern, but at the same time it is still really ancient. I mean, the high priest and the old Temple had pomegranates embroidered on their robes, and it also connects back to the number of laws that there are [Editor’s note: Pomegranates are said to each have 613 seeds, the same number of commandments in the Torah].

But in modern Judaism, there is so much more to explore in terms of finding meaning for ourselves with this symbol. I think it can inspire us to search for more abundance in our lives. Ultimately, I realized it was this traditional symbol that was being overlooked. But now that I’ve started using it in my jewelry, I see it more often.

What’s your creative process for designing your pieces?

I work super color based. So before I decided on anything, I decide on my color palette. I love the idea that color can evoke so much feeling and set an overall mood. From there I usually pull in a general idea of motifs. Is there anything from the last collection I want to bring back in its exact same composition? Or if there is a new way I want to use one of my already designed hamsa shapes, etc. For instance, the ARIA earrings will be coming back again in a new color for their third collection since they do so well. I am really excited about the new necklace chain options coming out with the Hanukkah collection (and also some of the new earring hardware I am using). I do every step in the process, from idea to physical product. The only thing that is done outside of studio is the physical laser cutting. But I am doing all the digital files for the cutting.

My inspirations for the collection are things like modern Jewish women, color, nostalgia, Israel, amulets of protection, and so on.

What do you hope people feel when they wear your pieces?