I’m calling it: Blair Braverman is the coolest person you’ll read about today. At just 29 years old, she is a published nonfiction writer, advice columnist, extremely active Tweeter… and she just happens to be an incredibly successful dogsled racer. Blair, the only Jewish person in her community (not including her dogs, who she says are Jewish), lives on a farm in rural Wisconsin with her husband.

Blair’s memoir, Welcome to the Goddamn Ice Cube: Chasing Fear and Finding Home in the Great White North, is a love letter to dogsledding, a travelogue of an American in Norway, a grappling with the aftermath of sexual violence, and an honest look at a woman navigating the male-dominated world of the wilderness. Her essays take your breath away in their beauty, wisdom and honesty (see: “What I’ve Learned from Having a Trans Partner”, “When I was scared, my gun-owning neighbors helped me feel safe”, and her advice column in Outside) and her tweets will bring you joy. On Twitter, Blair patiently answers her 15,000+ followers’ questions about specific dogs, about the sport, about the Iditarod (a nearly 1,000 mile dogsled race through Alaska), and her life.

Woke up to -24 degrees. We were one of the last 12-dog teams to start, and the dogs looked great, but we didn’t get Talese’s booties on in time. So I spent the first few miles looking for a tree to tie the sled to so I could put his booties on. No trees on the lake! pic.twitter.com/wXVR0mX7kK

She sometimes tweets about her Jewish identity, but rarely writes about it. So when I had the chance to ask Blair some questions over e-mail, I asked her about everything from her relationship with Twitter to being the only Jewish person for miles. 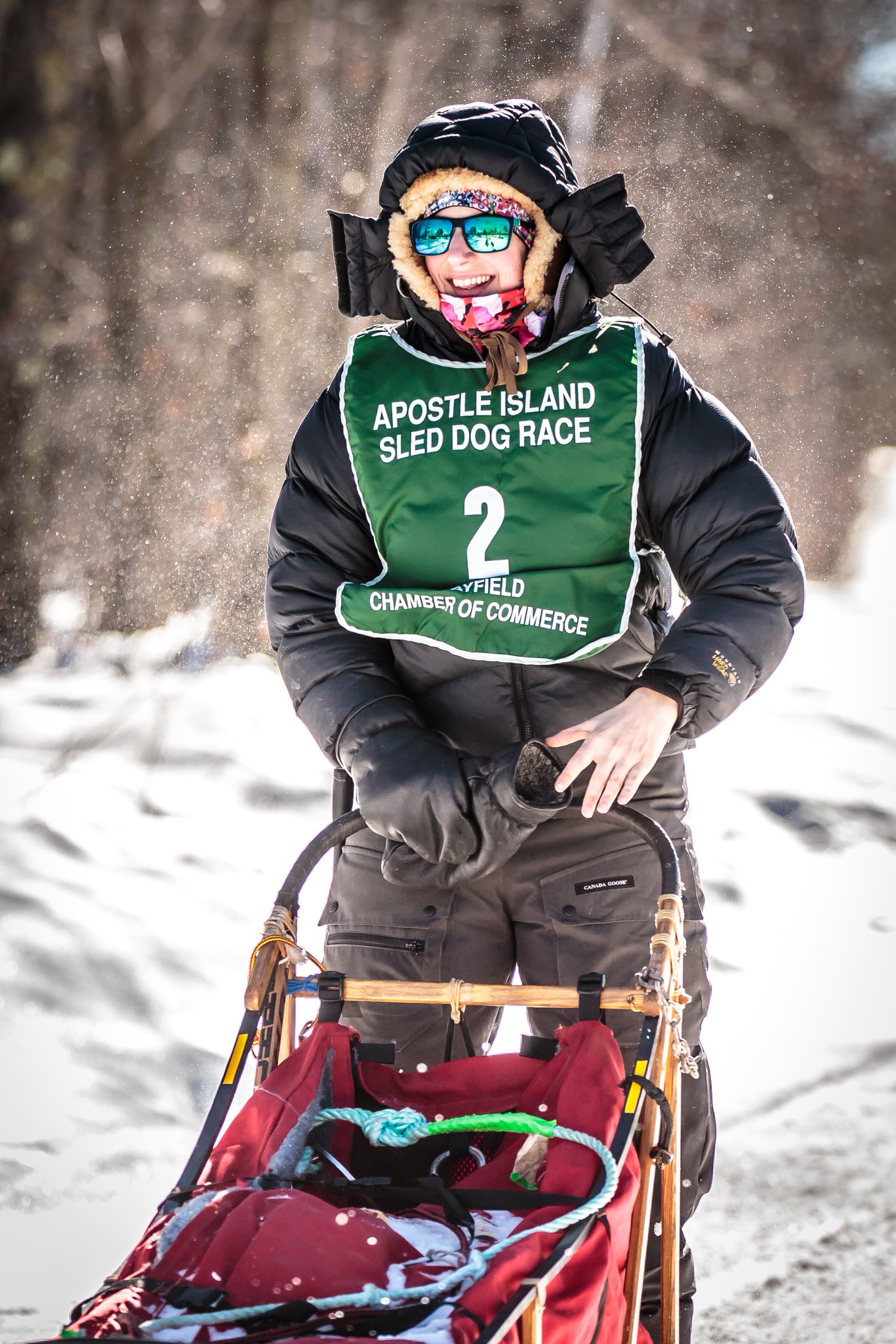 You have built such an amazing community on Twitter. Even for those (like me) who know nothing about the world of dogsledding, you have made it accessible and enjoyable. One of my favorite things about your account is that you use it to tell these beautiful stories in Twitter threads; when did you begin to use Twitter as a storytelling platform?

When I first started using Twitter, I joined it as a writer, and I was trying very hard to be taken seriously in that capacity (and to take myself seriously). So I decided not to post dog pictures. I thought they would make me seem less legitimate. Obviously, that’s some standard young-writer insecurity, but I stuck to that rule for about a year before I started sharing occasional sled dog updates.

In the summer of 2016, one of my dogs, Pepe, had puppies, two weeks before my book was published. I started making “puppygrams,” where people could request a message and I’d take a picture of one of the puppies with a speech bubble. 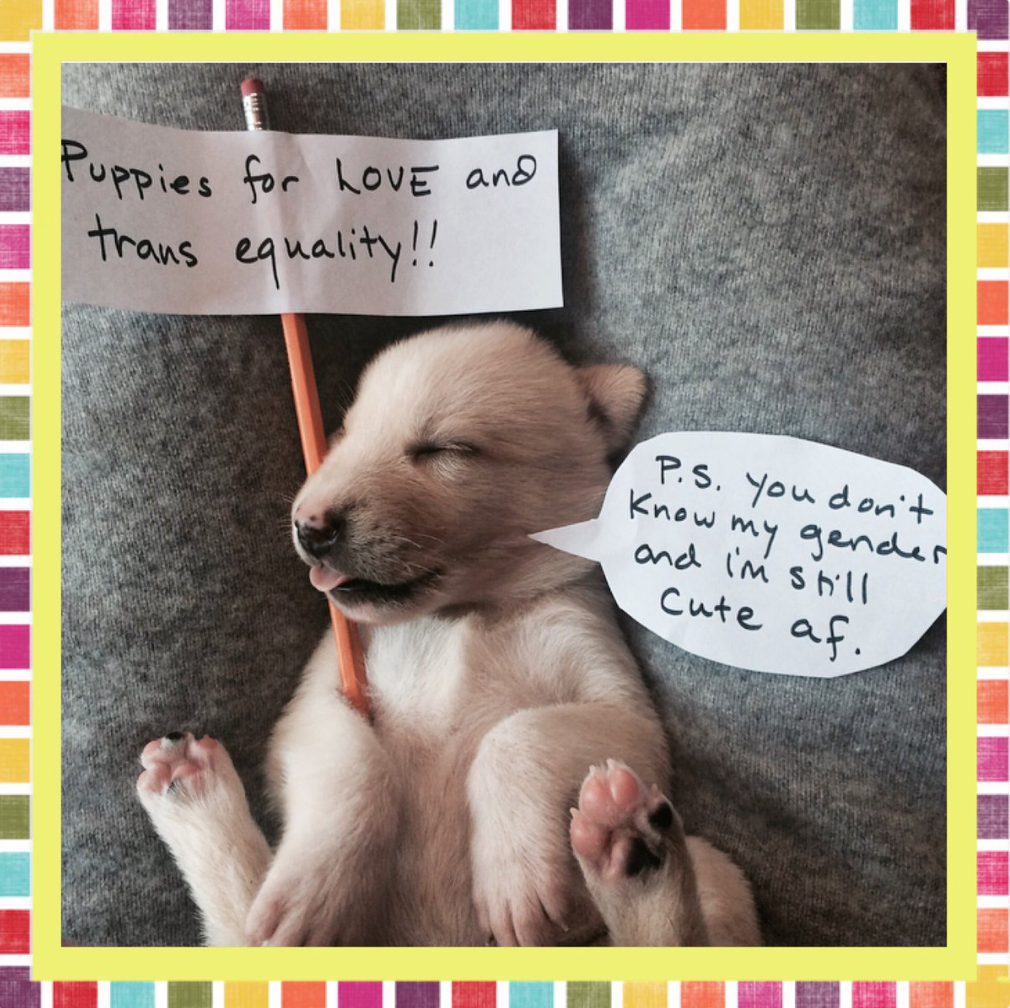 It was a nice way to distract myself before Ice Cube hit the world, and I had fun with the cheesiness of it all. I think that’s when the first community really started to form around the dogs.

What surprised me the most, I think, was that people remembered things about individual dogs. They knew that Pepe loved eating pineapple, and that Grinch was bad at napping, and that Boudica and Glory were best friends. At that point, when I told in-depth stories, I know that most of the followers already had some background. That’s exciting for me as a storyteller; I get to share a kind of real-time serial, with subplots and inside jokes and recurring themes. And I never know what was going to happen next.

Sometimes that’s hard, too; for instance, earlier this [winter], one of my dogs attacked another one, who was seriously injured. It’s not the kind of happy story I want to tell. But I feel a responsibility to transparency, and I think my readers understand that this is a messy life we’re living, and that we’re doing our best.

I haven’t wanted to talk about it yet, but last week I had the hardest day of dogsledding I’ve ever experienced. Actually, I still don’t want to talk about it, but it feels important to share the bad with the good. This is a complicated, wild life we live. It’s not always pretty.

I want to risk honesty about it. And every risk I’ve taken has been met with warmth. At this point, it really feels like we’ve built up a network of friends. A group of people who all come together around the dogs we all love.

You’ve been vocal on Twitter about your journey to qualify for the Iditarod — what made you decide to go for it this year?

I’ve been mushing for 11 years and racing for four. And the more I learn, the more I want to do with the dogs. A true long-distance event like that feels like a challenge I can take on with my best friends. It’s something I’ve been dreaming about since I was a kid.

How did you get your husband into the world of dogsledding?

I met my husband, Quince Mountain, in graduate school, where we were both studying writing. I was a musher and he’d been working as a cowboy. Plus, he had a farm in the Wisconsin northwoods. We moved there together when we graduated, and when I got my first sled dogs, he went all in. (Before that, like many fledgling mushers, I had only worked with other people’s dogs.) Now we run the team together, and in the winter, at least, it’s a full-time job for both of us.

A video Quince took of Blair at her last race:

Pulling out of Trail Center. 10 excited pups and a very solid musher. pic.twitter.com/Uvb5iMX04e

Went through some overflow so we had to put on fresh booties. Foot care is so important. Think of how many steps these pups take. Here’s Maggie and Matt Power and Blair. pic.twitter.com/YsaRApIjjw

Why is it important to you to be visibly Jewish?

I’ve lived in places where I’m the only Jew, particularly in rural Norway. And it’s dangerous, I think, for people to think they’ve never met certain kinds of people. Like if you think you don’t know any queer folks, or immigrants, or Jews — that’s how groups of individual humans are reduced to symbols and ideas. If I know someone, if I’ve lived with them, I don’t want them to be able to tell themselves that they’ve never met a Jew.

Did you grow up in a Jewish community? How does your mom feel about you living so far away from home?


She misses me! And I miss her and my dad. That’s definitely hard.

I grew up in northern California, in a wonderful reform congregation. I was with the same kids from pre-K through bar/t mitzvah and confirmation, and I spent my summers at Camp Tawonga, a Jewish camp near Yosemite that got me hooked on wilderness.

Also, shoutout to my mom, Jana Kay Slater, for helping to spearhead the first synagogue in Corvallis, Oregon, where my parents live now! I’m so inspired by her and everything she’s doing for the Jewish community.

After that Nazi profile in the New York Times, you tweeted about how someone that works for the ambulance squad in your town carries a swastika keychain. I’ve also read your tweets about the nearest synagogue being 75 miles away. How do you feel being the only Jewish person for miles?

It’s lonely. The synagogue “near” me (Mt. Sinai congregation in Wausau Wisconsin) is wonderful, but I end up going maybe twice a year, since 75 miles is a long drive on icy roads late on Friday nights. And I’m usually running dogs on Friday nights.

Even so, in our town of 500 people, I do what I can to share the more accessible parts of Jewish culture. I’ve been baking hamantashen for Green Bay Packers games, and this winter I recruited a bunch of neighbors for a dreidel tournament.

One of my favorite passages from Welcome to the Goddamn Ice Cube is when you write about running “Ask-a-Jew” sessions in Mortenhals, Norway:

The enthusiastic German organist arranged for me to lead an Ask-a-Jew session for the fifth-graders at Sand School who, along with their teachers, had never seen a Jew before. Each of the students prepared a question on a sheet of lined paper. I explained about the high holy days, and latkes, but mostly they wanted to know how to recognize a Jew when they saw one. “You look normal,” they observed. “That’s the point,” I told them. “Jews are normal people.” But they insisted. Put on the spot, I pointed out five students at random and suggested that they looked as Jewish as anyone else. This made the chosen students very happy. Then I wrote all their names for them in Hebrew, an alphabet I only vaguely remembered from religious school, with the confidence of someone who knows that her mistakes will never be found out. The session was such a hit that the seventh-grade teacher wanted me, and so did the ninth-grade teacher, and by the end of the week I had come back a half dozen times and spoken to nearly all the students in the school. I felt like a lousy ambassador but a good citizen.

What was it like in Norway running those “Ask-a-Jew” sessions?

The kids were so curious! They’ve grown up in a community of under 200 people in the Arctic, so they really knew nothing about Judaism. But they and their teachers were very interested. Each student had prepared a question on a slip of paper. I think that at first they were nervous, but by the end they were proud to have learned about something so foreign. I wrote their names for them in Hebrew, too, and they were very excited about that.

I love that you say all your dogs are Jewish. What is the logic behind that?

It’s just one of those things I know. They are proud Jewish sled dogs. Although my husband says that one of them, Colbert, is Catholic. But he’s new to the team. I think he’ll probably convert. Follow Blair Braverman on Twitter @BlairBraverman and read her book, Welcome to the Goddamn Ice Cube (trust us, you won’t be able to put it down). All images courtesy of Blair Braverman.