Towards the beginning of Jenny Slate’s Netflix special, Stage Fright, she tells the audience, “In case you’re like, ‘what weird, late-in-life bat mitzvah did I stumble into?’ This is a performance.” And truly what a performance it was. Interspersed with documentary footage of Jenny in her childhood home (which is literally haunted), talking to her grandmothers, and reflecting on performance and anxiety, Stage Fright is as unique as Jenny Slate herself.

But I’ve known that for a while — sort of. I attended the taping of Jenny Slate’s “late-in-life bat mitzvah” with my dear friend Hannah, who spotted the last-minute show announcement on Instagram and immediately got us tickets. I shared the link for the tickets in my work Slack, and my editor, Molly (hi Molly), wrote back “fun!!! pray for Jewy jokes 🙏.”

Well, I’m not sure if you believe in prayer, but on this one particular occasion, it worked. Stage Fright brings Jenny’s full Jewish self to the forefront, and not in a merely superficial way that can be found throughout much of Jewish pop culture. Yes, there are jokes about taking Lactaid and being cool at camp but not at home. There’s even an amazing line about being confused for one of the Broad City ladies. But Slate takes it much further than that. By opening up about her Judaism and showing us footage of her Jewish family, we get a full portrait of what it means to be a modern Jewish woman today — and what it means to be Jenny Slate.

“My name is Jenny Slate, and if you’re looking at me from any angle, you will notice that I am a Jewish woman,” she says towards the beginning of her set. “Got that look,” she continues, zig-zagging her head. “And I will say, when I was younger, I looked almost exactly like Anne Frank.” She then walks to the back of the stage and pantomimes how she would enter Jewish spaces as an Anne Frank lookalike. Her comedy is so physical, and so funny, that these screencaps do not do it justice, but I screencaped them for you anyway: 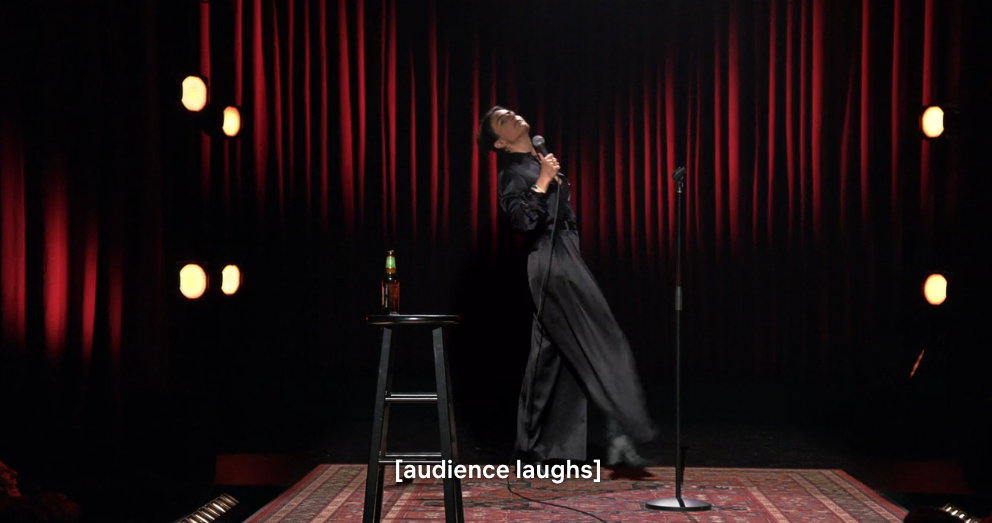 “It’s a very cheap thing to do, but yeah, I did do it,” she ends the joke. It’s a very dark joke — what child is conscious of the fact they look like one of the most famous young victims of the Holocaust? — yet somehow, Jenny makes it work. (Also, dark humor is very Jewish.)

In another Jewish story, Jenny talks about going to a midnight Catholic mass. “First of all, midnight, way to go!” she jokes. Then she puts on the affect of a Jewish grandmother, and says: (Could you imagine a midnight Jewish service? Every single person would be complaining.)

Jenny then goes on to describe her takeaway from the mass — “I just felt so short-changed,” she sighs. “The Christmas songs, and thinking about it, they’re all just like, ‘jingle jangle! Everybody gets a present! Like, Santa comes down but he never catches on fire. We don’t know how it happens. Everything’s fine. We never worry. That’s not in our culture.’ Like…” This perfectly sets up her joke about Jewish songs, observing that the “happy” Jewish songs we sing are just: It’s a perfect encapsulation of “Christmas envy” — and it’s true, when you compare Hanukkah and Christmas, they just don’t really compare, and they’re not supposed to. But then, as an antidote to the sad Jew on Christmas trope, the film cuts to old home video footage of Slate’s family celebrating Hanukkah when she was a child. You can hear the adults singing v’tsivanu l’hadlik ner shel Hanukkah as kids run around the lit menorahs. It’s a beautiful little moment, which then cuts to a scene of Jenny talking to her sisters about the time she got kicked out on Hanukkah: Turns out Jenny was sent to the back porch for doing something that made their mom furious (which none of them can remember), and was stuck outside for minutes watching the party happen through the window.

Jenny re-telling this Hanukkah story, and imitating their mom, is one of the magical things about this special. Because this story wouldn’t necessarily work in a stand-up format — her sisters chime in every now and then — but it does work as sisters recounting a funny moment from their childhood. As Jenny’s sisters laugh at her delivery and her recollections, it makes you feel a sense of intimacy with them. The stand-up set might be a performance, but this moment is not. There’s a lot of thought about “authentic” celebrities and how social media has changed the landscape of famous people connecting with their fans. Yet, social media is a curated presence — there’s only so much truth to an Instagram post or a tweet. Yet, watching Jenny Slate talk about Hanukkah with her sisters in their childhood home felt authentic and intimate and all the things we crave to have with famous people. Yes, I know there was a film crew there and the Slates knew they were being filmed for a special, but when you see them interact, it’s hard not to believe they would be having the exact same conversation whether there were cameras there or not. By putting Jenny in her element — being with family, making her sisters laugh — it shows us a side of her that won’t be revealed on social media, or in red carpet interviews, or during talk shows. It shows us a vulnerable Jenny, and one that feels (dare I use this word?) relatable.

That’s why the the highlight of the special, for me, was when Jenny talks about her grandmothers. She speaks about both of them on stage, and then the special cuts to Jenny talking to each of them in real life. The best is her imitation of her Nana Connie, whose voice is “like diamonds being rolled around in the dust.” Here’s Jenny’s imitation: (Just go watch it. Like I said, screencaps do not do stand-up justice.)

The special then cuts to Jenny and Connie, with Connie speaking in the exact voice that Jenny was just imitating, solidifying her spot as a master impressionist: The love Jenny has for her family — her sisters, parents, and grandmothers all make an appearance — is so clear and so heartwarming. And this glimpse behind her jokes is really what gives Stage Fright a distinct tone: it’s Jenny, vulnerable and unfiltered. At one point, she goes into her Nana Connie’s closet to try on dresses, and there is a beautiful scene of her spinning around in a flowy hot pink dress in her grandmother’s bathroom. This is me, Jenny seems to be saying, this is where I’m from and these are the women who raised me.

Last night, I watched Stage Fright with Hannah, the friend I went to the taping with. We settled in with (surprisingly delicious) Trader Joe’s pumpkin Joe Joe’s and turned it on. Much to our delight, we immediately spotted ourselves in the audience (please pardon my handwriting): We spent the next hour or so watching Jenny, laughing at jokes we had already seen, and commenting on what we remembered (and didn’t) from the taping. When we walked out of the show back in April, we had talked about how it didn’t necessarily feel like stand-up, but just very good storytelling. And seeing the final product — her stories interwoven with family history — makes so much sense. As the credits rolled to Jenny dancing to “Ghost Town” by Don Cherry in her haunted childhood home, we turned to each other and said, “Wow, I love Jenny Slate.”

There’s a lot we think about when we think about celebrities — we build up our perception of them in our brains. And, there’s a lot of publicly available information out there. Who they date. Who they’re spotted with. Who they broke up with and then got back together with. But we never truly know them.

After watching this special, I feel like I now know Jenny Slate. Not just because I am literally cited on her Wikipedia page with an Alma article I wrote about her relationship with Chris Evans, and not because I follow her on Instagram or read her new book (which was very good), but because this special feels like a journey into what makes Jenny Slate — Jewish woman, daughter, sister, comedian — Jenny Slate.